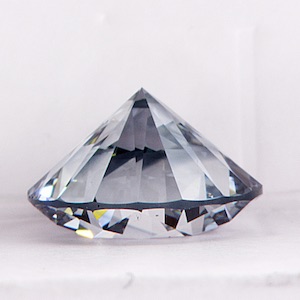 Laura Sipe couldn’t believe her eyes. In February, the owner of J.C. Sipe Jewelers in Indianapolis was readying an I-color lab-grown diamond for a customer. She had always heard that lab-growns fluoresce differently under ultraviolet light, so she decided to take out her UV lamp and check for herself.

When she removed the stone, it was no longer an I. It was gray. And she “freaked out.”

She called up her vendor, who was just as surprised. “One person in the office said she had heard of something like this. She said the diamond turned purple and then it reverted back.”

Sipe’s diamond indeed returned to its original color the next day. She still told the vendor to take it back.

If a customer saw that, “that would freak everyone out,” she says. “Including us.” She hasn’t had that happen to any stone since.

What brings this up is this week’s announcement that Gemological Science International saw something similar at its lab this summer.

A 2 ct. diamond grown with the chemical vapor deposition (CVD) method transformed from near-colorless to slightly blue (pictured) after a few minutes’ exposure to short-wave UV radiation in a DiamondView machine.

“It was a dramatic change,” says chief information officer Nicholas DelRe. “I thought I was seeing things.”

The diamond retained the blue tinge when it was tucked into parcel papers and only returned to its original hue after two and a half hours in the sun. (Typically, the color reverts after about a half hour of exposure to sunlight.)

While GSI’s announcement caused a bit of a stir, it’s long been known that some CVD diamonds will temporarily change color under the “right” conditions. A 2010 Gems & Gemology article reported that the “color of as-grown [non-treated] CVD synthetic diamond gemstones may not be stable,” and that, if subject to ultraviolet radiation or high temperatures, “as-grown CVDs can show large, reversible changes in color.” It notes that these changes don’t cause any structural damage, and adds that, with exposure to sunlight, the stone will return to its original look.

According to Gemological Institute of America distinguished research fellow Dr. James Shigley, some CVD diamonds “display a slight brownish appearance, which can take on a bluish or grayish coloration after they are exposed to UV radiation. This color change can be reversed to the brownish appearance if the diamond is exposed to light.”

He believes that the GSI diamond turning blue was likely sparked by “an optical defect involving silicon, a common impurity in CVD diamonds.”

This kind of color change may be disconcerting, but it is not common, says GIA vice president of research and development Wuyi Wang.

“The unstable color is related to concentrations of some specific unstable optical centers in as-grown CVD diamonds,” he says. “Usually, the concentration is low, so the effect on color is not obvious.”

In addition, many CVD diamonds are treated with high-pressure high-temperature (HPHT), which eliminates the defects and stabilizes the color, he says.

DelRe feels that, at the root, the issue is a difference in how mined and certain lab-created diamonds form.

“Natural diamonds grow in an almost perfect environment, deep inside the Earth,” he says. “We are trying to mimic that. CVD is usually low-pressure high-temperature. There is enough pressure that it crystallizes the diamond, but it is not exactly the same.”

He agrees that it’s rare that the color change is noticeable.

“From what we have seen, this [diamond] was an extreme case,” he says.

Still, DelRe feels it’s important that CVDs be graded in a consistent atmosphere. GSI places them in a full-spectrum light box for 30 minutes before grading.

He thinks that it’s possible that a small number of CVDs might change color when worn at a sunny beach or exposed to a black light at a nightclub, though he’s never heard of it happening. “At this point, this is more of an assumption,” he says. “However, there are unknowns, so why take the chance?”

DelRe recommends that jewelers become “educated as to what may or may not happen. They should make sure they do not have their lab-grown stones and jewelry next to a UV light source. Also, it would be a good idea for jewelers to their have lab-grown jewelry exposed to direct daylight lighting in a light box at least once before putting it out on display, just to be on the safe side.”